NOTE: The excerpt from “On the Dignity and Vocation of Women” is long – the most important bit (to me) has been highlighted (bold/italics). Please feel free to skip down to that, then read my personal comments.

In the sixth month, the angel Gabriel was sent from God to a town of Galilee called Nazareth, to a virgin betrothed to a man named Joseph, of the house of David, and the virgin’s name was Mary. And coming to her, he said, “Hail, favored one! The Lord is with you.” But she was greatly troubled at what was said and pondered what sort of greeting this might be. Then the angel said to her, “Do not be afraid, Mary, for you have found favor with God. Behold, you will conceive in your womb and bear a son, and you shall name him Jesus. He will be great and will be called Son of the Most High,* and the Lord God will give him the throne of David his father, and he will rule over the house of Jacob forever, and of his kingdom there will be no end.” But Mary said to the angel, “How can this be, since I have no relations with a man?” And the angel said to her in reply, “The holy Spirit will come upon you, and the power of the Most High will overshadow you. Therefore the child to be born will be called holy, the Son of God. And behold, Elizabeth, your relative, has also conceived  a son in her old age, and this is the sixth month for her who was called barren; for nothing will be impossible for God.” Mary said, “Behold, I am the handmaid of the Lord. May it be done to me according to your word.” Then the angel departed from her.
Luke 1:26 – 38

The Gift of the Bride
27. The Second Vatican Council renewed the Church’s awareness of the universality of the priesthood. In the New Covenant there is only one sacrifice and only one priest: Christ. All the baptized share in the one priesthood of Christ, both men and women, inasmuch as they must “present their bodies as a living sacrifice, holy and acceptable to God (cf. Rom 12:1), give witness to Christ in every place, and give an explanation to anyone who asks the reason for the hope in eternal life that is in them (cf. 1 Pt 3:15)”.51 Universal participation in Christ’s sacrifice, in which the Redeemer has offered to the Father the whole world and humanity in particular, brings it about that all in the Church are “a kingdom of priests” (Rev 5:10; cf. 1 Pt 2:9), who not only share in the priestly mission but also in the prophetic and kingly mission of Christ the Messiah. Furthermore, this participation determines the organic unity of the Church, the People of God, with Christ. It expresses at the same time the “great mystery” described in the Letter to the Ephesians: the bride united to her Bridegroom; united, because she lives his life; united, because she shares in his threefold mission (tria munera Christi); united in such a manner as to respond with a “sincere gift” of self to the inexpressible gift of the love of the Bridegroom, the Redeemer of the world. This concerns everyone in the Church, women as well as men. It obviously concerns those who share in the a ministerial priesthood”,52 which is characterized by service. In the context of the “great mystery” of Christ and of the Church, all are called to respond – as a bride – with the gift of their lives to the inexpressible gift of the love of Christ, who alone, as the Redeemer of the world, is the Church’s Bridegroom. The “royal priesthood”, which is universal, at the same time expresses the gift of the Bride.

This is of fundamental importance for understanding the Church in her own essence, so as to avoid applying to the Church – even in her dimension as an “institution” made up of human beings and forming part of history – criteria of understanding and judgment which do not pertain to her nature. Although the Church possesses a “hierarchical” structure,53 nevertheless this structure is totally ordered to the holiness of Christ’s members. And holiness is measured according to the “great mystery” in which the Bride responds with the gift of love to the gift of the Bridegroom. She does this “in the Holy Spirit”, since “God’s love has been poured into our hearts through the Holy Spirit who has been given to us” (Rom 5:5). The Second Vatican Council, confirming the teaching of the whole of tradition, recalled that in the hierarchy of holiness it is precisely the “woman”, Mary of Nazareth, who is the “figure” of the Church. She “precedes” everyone on the path to holiness; in her person “the Church has already reached that perfection whereby she exists without spot or wrinkle (cf. Eph 5:27)”.54 In this sense, one can say that the Church is both “Marian” and “Apostolic-Petrine”.55

In the history of the Church, even from earliest times, there were side-by-side with men a number of women, for whom the response of the Bride to the Bridegroom’s redemptive love acquired full expressive force. First we see those women who had personally encountered Christ and followed him. After his departure, together with the Apostles, they “devoted themselves to prayer” in the Upper Room in Jerusalem until the day of Pentecost. On that day the Holy Spirit spoke through “the sons and daughters” of the People of God, thus fulfilling the words of the prophet Joel (cf. Acts 2: 17). These women, and others afterwards, played an active and important role in the life of the early Church, in building up from its foundations the first Christian community – and subsequent communities – through their own charisms and their varied service. The apostolic writings note their names, such as Phoebe, “a deaconess of the Church at Cenchreae” (cf. Rom 16:1), Prisca with her husband Aquila (cf. 2 Tim 4:19), Euodia and Syntyche (cf. Phil 4:2), Mary, Tryphaena, Persis, and Tryphosa (cf. Rom 16:6, 12). Saint Paul speaks of their “hard work” for Christ, and this hard work indicates the various fields of the Church’s apostolic service, beginning with the “domestic Church”. For in the latter, “sincere faith” passes from the mother to her children and grandchildren, as was the case in the house of Timothy (cf. 2 Tim 1:5).

The same thing is repeated down the centuries, from one generation to the next, as the history of the Church demonstrates. By defending the dignity of women and their vocation, the Church has shown honour and gratitude for those women who – faithful to the Gospel – have shared in every age in the apostolic mission of the whole People of God. They are the holy martyrs, virgins, and mothers of families, who bravely bore witness to their faith and passed on the Church’s faith and tradition by bringing up their children in the spirit of the Gospel.

In every age and in every country we find many “perfect” women (cf. Prov. 31:10) who, despite persecution, difficulties and discrimination, have shared in the Church’s mission. It suffices to mention: Monica, the mother of Augustine, Macrina, Olga of Kiev, Matilda of Tuscany, Hedwig of Silesia, Jadwiga of Cracow, Elizabeth of Thuringia, Birgitta of Sweden, Joan of Arc, Rose of Lima, Elizabeth Ann Seton and Mary Ward.

The witness and the achievements of Christian women have had a significant impact on the life of the Church as well as of society. Even in the face of serious social discrimination, holy women have acted “freely”, strengthened by their union with Christ. Such union and freedom rooted in God explain, for example, the great work of Saint Catherine of Siena in the life of the Church, and the work of Saint Teresa of Jesus in the monastic life.

In our own days too the Church is constantly enriched by the witness of the many women who fulfil their vocation to holiness. Holy women are an incarnation of the feminine ideal; they are also a model for all Christians, a model of the “sequela Christi”, an example of how the Bride must respond with love to the love of the Bridegroom.
St. John Paul II – On the Dignity and Vocation of Women 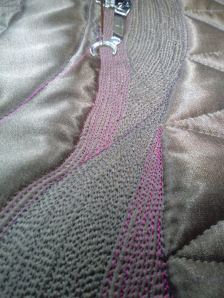 As a newlywed if you’d asked me how many children I would have, it would have been 12. Now that you have picked your chin up off the floor.  There was a lot that went into that both from the Protestant background and as a Catholic – there’s something of an expectation for a large family. And I’ll share that the fact that I wasn’t having babies was downright painful at moments. Pain.Full.  I really wanted to be open to however many children God would allow. And God did allow but not in the way I thought or imagined. Our family extended itself in the opportunities to enter into the lives of others in nurturing ways.

As a quilting teacher I get to give quilters the tools that will help them make their own decisions and grow. I love seeing those aha! moments. It’s hard when a student struggles – for whatever reason the machine, the fabric, thread or something just not making sense. There is a moment when I wonder have I done my best to prepare? Have I thought of every way to explain this? Do I really know machine quilting well enough to be out there teaching? Well the answer is yes and I came to understand a long time ago that I am not going to be the right teacher for everyone. It doesn’t stop the wondering though.
Quilting has taught me so much about patience, and growth and honoring the work and the person. Quilting has taught me so much about letting go of expectations of others and expecting more of myself. Quilting teaches me to be forgiving and loving.
Well it’s the quilting and it’s the people whose lives I get to enter into for a time who teach me how to be patient and show me how to be more of the “mother” I’m called to be.

This site uses Akismet to reduce spam. Learn how your comment data is processed.